Kicking off the SportCares 10YA HEARTS Football League 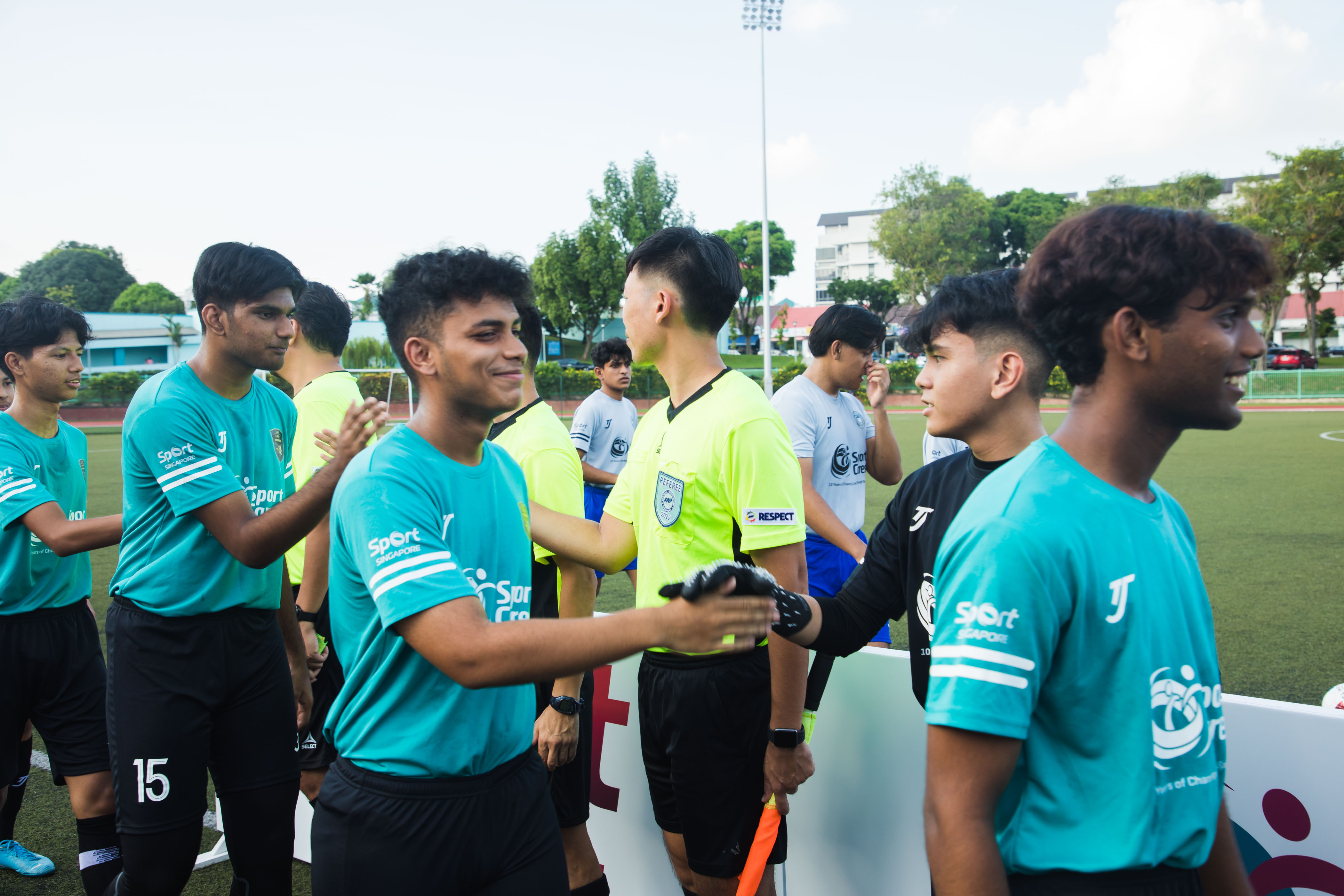 We could not have planned for a better year to launch our inaugural football league for our Satruday Night Lights (SNL) participants.

On 4th June 2022, we officially kicked off the SportCares 10YA HEARTS Football League, with 25 teams split into three categories and playing the beautiful game across seven different venues every other Saturday. It was the second initiative we launched as part of the SportCares 10th Anniversary celebrations.

Matchweek One saw 16 teams come together, decked out in their newly printed jerseys, to play their first game in the league. We decided to head over to Serangoon Stadium, one of the four match venues for the evening, to watch two SNL teams, East Warriors and Hokkaido Wolves, in action.

As the referees did their field inspection, you could feel how nervous the players were. Quietly going about their warm-up drills, rushing to get their attire right and ensuring they had everything in place before they took to the field for the team photos and coin toss.

As we took our seats at the stands to watch the match, we bumped into Shawn Lim, Head of SportCares, who said, “We are thrilled to finally see the SportCares 10YA HEARTS Football League kicking off today. This is a celebration of how far we have come in using sport as a force for good; it also marks another milestone in developing SNL, our flagship football programme. For the first time, we are organising a league for 25 teams, 20 of them based in SNL and five invited teams, over five months across seven stadiums.

While there may be some concerns about a possible lack of match preparedness, we are confident that the players will be able to shake off the rust once the first match kicks off. The rigour and challenge of competitive matches are an essential component of our youth development philosophy and present many teachable moments for our coaches to reinforce values taught during the teams’ training sessions.”

Just as Shawn finished his sentence, the referee signalled the start of the match, and we immediately shifted our focus to the proceedings on the pitch. It did not take too long for things to get going as East Warriors’ Syed Abdul Rizwan pounced on a loose ball after a messy clearance from a corner kick and tapped it into the back of the net to give his team an early lead.

Little did he know that he made history with that goal as it was the first goal of the SportCares 10YA HEARTS Football League. East Warriors built on the early lead that Rizwan got them and scored another two goals in the first half. Their opponents, Hokkaido Wolves, found their footing early in the second half and pulled one back, but it was not enough. The Warriors stayed on track and ended the match with all three points.

17-year old Rizwan was beaming when we spoke to him after the match, and he mentioned, “It was a new experience for me playing in a league as I have not done it before, and I feel proud of having scored the first ever goal in the history of the SportCares 10YA HEARTS Football League. It makes me want to improve my game and be a better player.” 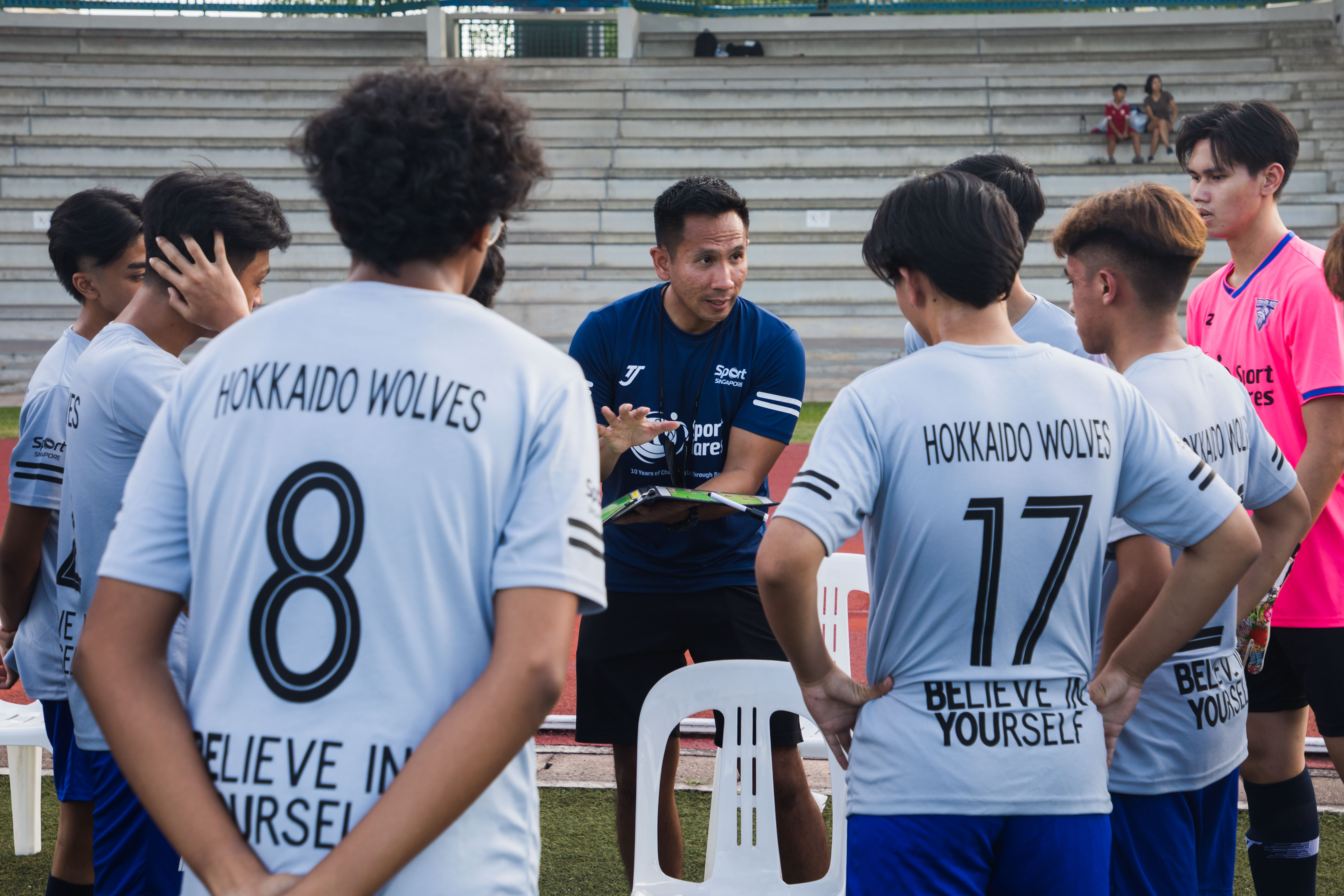 Hokkaido Wolves’ coach Alif shared, “Firstly, it was great to see the professional set-up here for the league, so credit must go to the SportCares Team on that. It’s something that the players did not expect and it was surely an experience that they will cherish.”

On the match result, he said, “It did not go our way, but the most important part for us as a team was to work together and enjoy the game. With quite a few new players in the team, I wanted all the players to get some match time, and we managed to do that too.”

Echoing the thoughts on the league set-up was coach Khairil of East Warriors. He added, “I was impressed with the set-up for the match today at the stadium, and we as a team are happy to be part of the league.”

When asked about his team’s winning start to the league, he mentioned, “We got off to a slow start even though we scored two early goals, but we managed to keep at it and settled in well. We did have a few scares towards the end, but we were lucky to hang on to the two-goal lead till the final whistle.”

As the coaches went back to debriefing their teams and getting the players started on their post-match drills, you could hear the players now, with their nerves calm and back to being the usual teenagers they are.

All it took was a sport. A beautiful game. A team game.

Not the result at the end of the match.

As more teams get match time over the next few months, we believe we will have more stories to share with you and we look forward to doing just that.

And here are the results from Matchweek One of the SportCares 10YA HEARTS Football League: