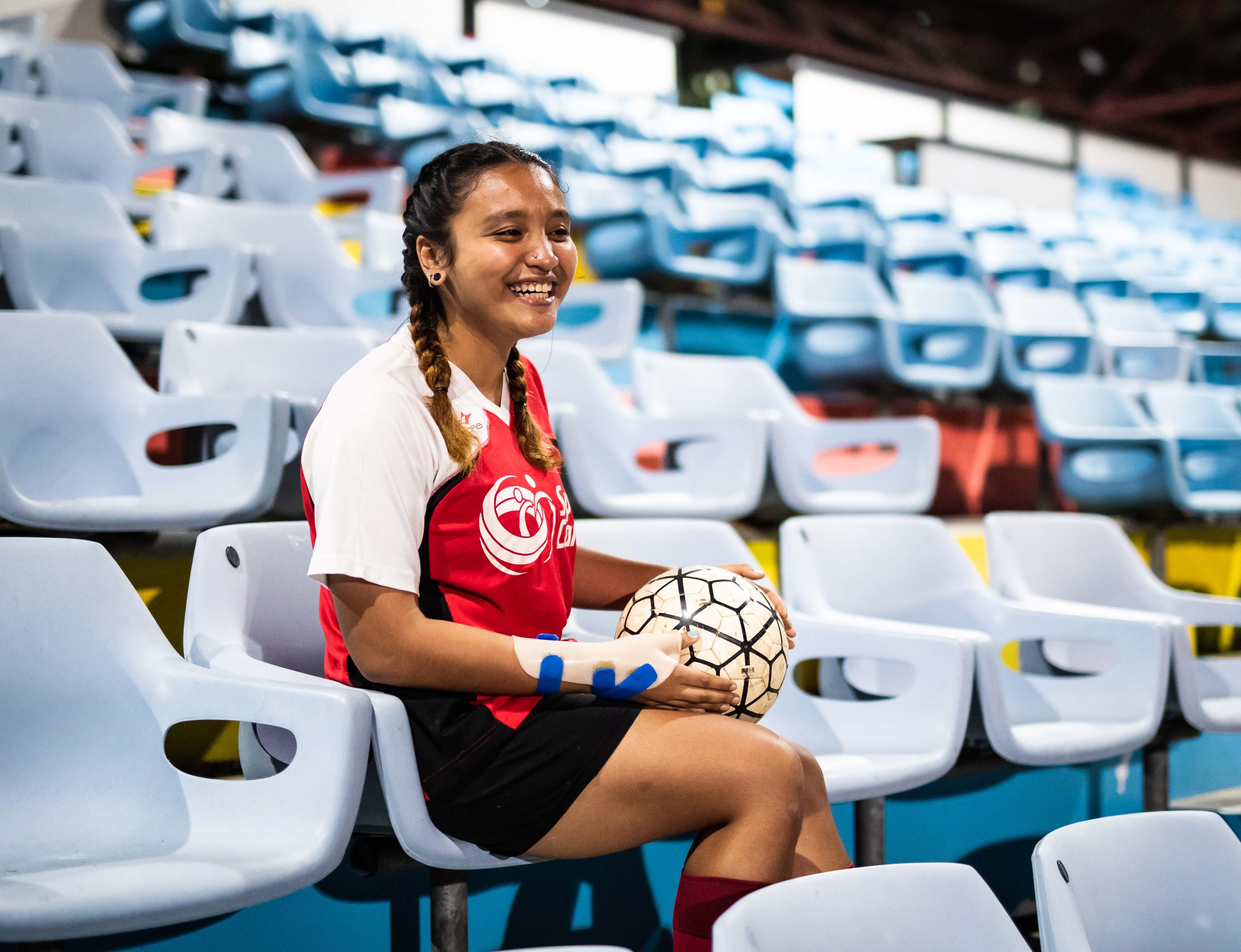 Boisterous laughter and cheering filled the night sky. Families gathered around the campfire and shared stories with one another.

Then, things took a sombre turn. One family shared about the difficult times they had gone through together as a family.

Mere hours ago, Zana was apprehensive about even talking to her group, but now they were chatting like old friends.

Zana had just gotten home from work when I called her for an interview. “How’s life?” I asked her.

“Not the best, but I’m really grateful for it.” Zana shared how her life wasn’t the most smooth sailing. “We had some financial difficulties growing up, and the stress did trickle down to us,” she said.

It was then that she joined SportCares’ Saturday Night Lights football programme that she found a way to relieve her stress. “Football really helped me to get my mind of things during that tough time, when you’re in a intense game you’re just really focused on it”, she quipped. SNL was her first experience with football, and after the first session she knew this was going to be her passion.

In life, many of us encounter that rare individual that makes a huge impact in their lives. For Zana, that individual was her SNL coach, Chris. “Coach Chris has been such a blessing in our (the football team) lives,” she excitedly mentioned. “She is so caring, and would always lend a listening ear if any of us needed someone to confide our problems to - she would even tutor us for math!”

Coach Chris was indeed a coach that went the extra mile for her team - she would have team dinners regularly to bond with her footballers, and established a environment that made the girls willing to try even in the face of overwhelming adversary.

Zana then shared about her experience facilitating a camp in Singapore Zoo under the SportCares Champions initiative. I asked her what her favourite experience in the camp was.

The camp was a totally foreign experience for her, as she had never facilitated a camp before. “I was so flustered, and felt like a fish out of water!” she laughed. She mentioned how she was tasked with getting her group to a location, but she didn’t even know where to begin. It was then that a senior facilitator showed her the ropes, that she was able to understand what she had to do. “I realised that I was now responsible for my group, and needed to take good care of them to ensure they had a fun experience in the camp.”

Shyness was also a major barrier that she had to overcome, as the groups consisted of families, usually parents and young children. Zana didn’t know how to interact with them, which was why she initially stayed mum.

It was the children in the group that prompted her to start opening up. “The children were so cute!”, she exclaimed, recounting how the children would make her laugh. Breaking the ice with everyone else was a breeze afterward. “It was a real eye-opening experience for me.” she said. “I’m now much more confident if I have to talk to people I’ve never talked to before.

Zana also learned new vital communication skills during her experience in the camp. “I already had some semblance of knowing how to communicate from my time in football, where you need to communicate to win, but this was another ball game!” Zana had to learn how to interchange her tone and registers talking to different groups of people, and to explain things thoroughly to her group. “Sometimes, you yourself may think that this is easy to understand, but as a leader you have a responsibility to make sure everyone understands, and help them if they don’t.”

She also reminisced about a memorable moment she had during the camp. There was an activity for the younger campers that involved them doing low elements. Zana saw a young boy struggling to cross the balance beam. She initially had doubts if she was supposed to help him, but when she saw him almost fall, she rushed over to help him. “I helped him cross the balance beam by letting him hold my hand,” Zana said. “I just knew that I had to help him, you know, when you see someone struggling with something, you should always offer a helping hand”.

The pinnacle of her experience at the zoo was the finale, the campfire. All the groups had come together to share their stories, and it was a bittersweet moment. Some groups shared happy stories, while other shared about some difficult periods in their lives. “I teared up listening to all these families talk about their experiences, and it really reminded me to cherish my family more,” she shared. There was a sense of intense camaraderie despite the short time they had together.

The camp has taught her so much more in such a short span of time - in fact she calls this her favourite camp! “The experiences I had in the camp really broadened my horizons - and I was able to do so much more what I couldn’t do before!”