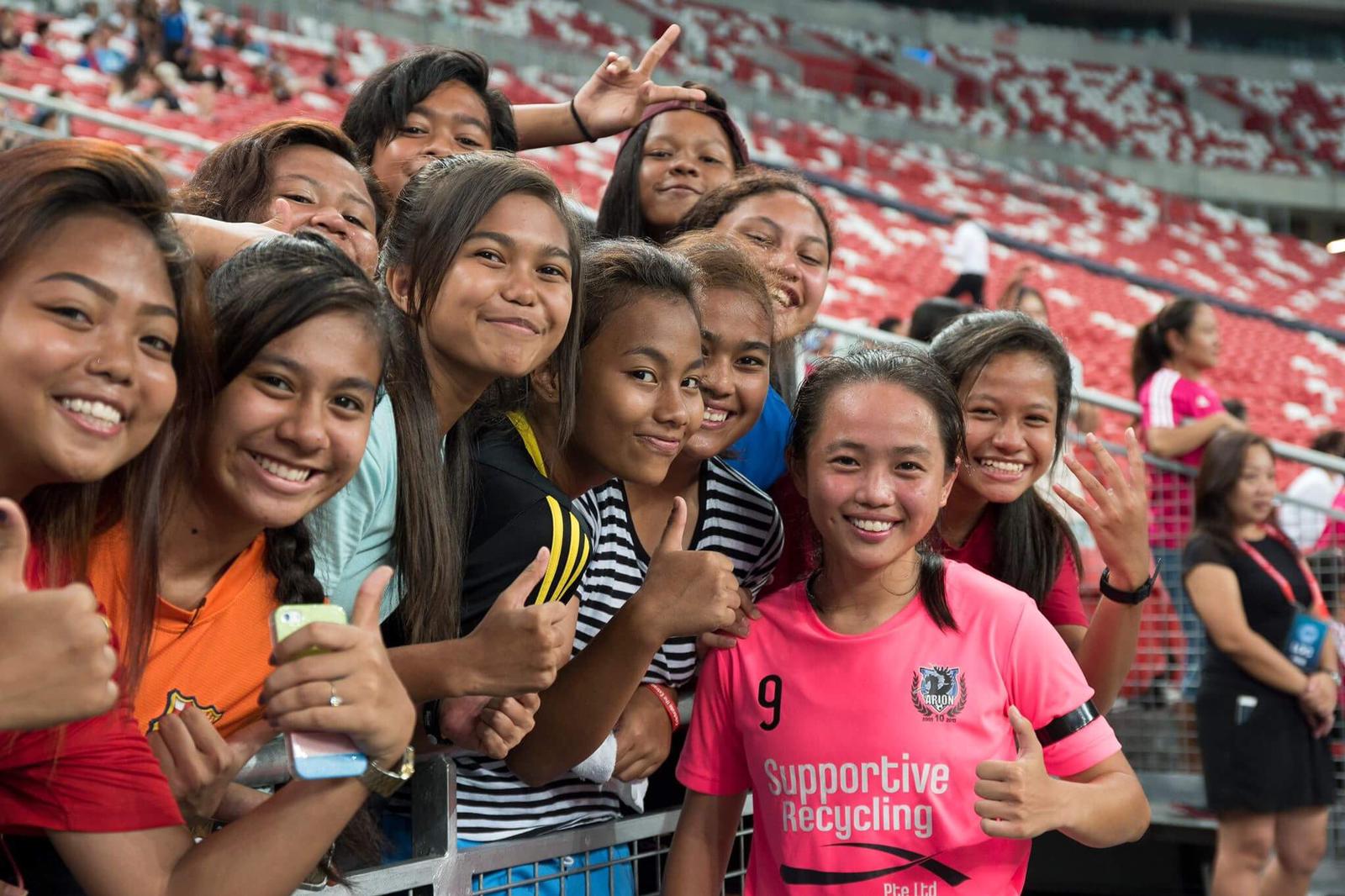 It is not easy to pick out Coach Chris from the throng of soccer girls standing around the grandstand of the stadium. The unassuming 24-year-old Coach of the Saturday Night Lights (SNL) girls soccer team blends in effortlessly with her team, betraying the close rapport she shares with them.

However, Coach Chris does stand out for her unique approach to coaching. She believes in creating an environment where youths feel comfortable and safe enough to fail.

“Through failures, we learn lessons and my job as a coach is to guide them through these failures so that they can be confident and successful individuals in their own right”.

She connects with them on an emotional level as well, eating and conversing with the girls during the post-training dinners provided by the programme and making the effort to get to know them. Coach Chris is known to employ different methods to learn more about her team, even creative tactics such as a game of Two Truths and a Lie to get some of those who are less-forthcoming about themselves to open up to her.

“As much as coaching is about football, you are still dealing with people to people relations where emotions are definitely involved. Understanding how players feel and showing interest in how their day was actually builds trust and it becomes easier to connect with them and teach them what you have set out to teach.”

Coach Chris cares about the girls to the point that she is willing to put their needs above her own. “Once, I had to go to the US for an internship lasting 3 months and I hesitated in taking it up because the girls were on my mind and I did not want to leave them.” This hesitation was heightened by the fact that her team would be taking part in the Delta League competition while she was away.

Unsurprisingly, this immense care that Coach Chris has for her team is reflected back to her. She recounted how encouraging and supportive the girls were when she shared her news about the internship with them. “In the end when I actually told them, they were quite receptive to it. They said I should go and so I went.”

The fact that she was out of their sight for a quarter of the year did not mean that the girls forgot about their coach. In fact, they broke the news of the Delta League results to her almost immediately. “[The girls] were playing the semis against this very strong team that nobody thought they would win against. But then, they called me up at midnight - they video called me - and were like, “Coach we got into the finals!” and my heart just melted instantly. It was nice to know that at the end of the day, I had an impact on their lives.”

This relationship that Coach Chris shares with her young team is one that is quite rare. Mutual respect, care and support are the obvious undercurrents of their bond but beyond that, the girls have a steadfast faith in their coach - knowing that she will not forget nor abandon them - and are perceptive enough to acknowledge that their coach has pursuits beyond them.

As Coach Chris continued to talk about her experience in SNL, I was completely floored by what she was willing to do for “her kids”. The coach goes above and beyond for her team, caring not only about their football abilities but also their personal development and well-being.

When needed, she gives the girls tuition before practices and also helps them to procure training attire like shoes and jerseys, even donating some of her own to the girls. She also makes sure they know they can always talk to her if they need a listening ear.

The level of care and support that she has for her girls is astounding and definitely goes far beyond any average person. I asked her why she felt it was necessary to be invested in her girls’ personal lives and why she did not just simply coach soccer.

She drew back to her own personal experience. “My parents got divorced when I was very young. Like my kids, I understood what it is like to have so many uncertainties in life. At that time, I just wished that there was somebody to be there for me. So, right now as a coach, I use my life experience as a reference and become that somebody to my kids, the figure that the 12-year-old me wished for.”

This is a welcome support for many on her team. I got the chance to talk to three of the girls during one of their practices. They were eager to share everything about their favourite coach, overlapping mid-conversation and finishing each other’s sentences.

But they all shared the same sentiments: Coach Chris is simply unlike any other coach they have ever had and they all look up to her.

“She’s our idol. She gives us the motivation to be our best selves.”

“She’s a very patient coach who will match your pace.”

“Most of us don’t get the exposure we need [to further opportunities] because of some circumstances, but she helps us with that.”

In fact, in addition to tuition, Coach Chris has helped the girls to participate in countless soccer matches, volunteer opportunities and programmes, some of which are provided by SportCares in order to develop useful leadership and communication skills for working in the future.

“I mean, if the coach actually puts effort in you, you would want to go for training and stuff, right? And I think that’s the vibe she gives us.”

Of course, I just had to ask.

“Do you think you can get the same experience with any other coach?”

The girls looked at each other with an indecipherable expression before one of them said, “One, two, three, just say yes or no. Okay, one, two, three,”